The author Harm de Jonge (1939) was born aboard a river-vessel. As a child he crossed the Dutch, German and Belgian rivers with his parents. His mother taught him to read, his father presented him with a colour-pencil every time he could recite a table. Eventually he had to attend a proper school and a foster family was found for him ‘ashore’.
He studied Dutch language and literature, whereupon he became a teacher first at high school and then at a training college for elementary school teachers.

Nowadays he lives in the ‘Beaver Valley’ as a full-time author. Amongst his juvenile books Jesse Ballewal-tsji and The Daredevil were awarded with the Dutch prize Flag and Pennant. Wings for Jorre, The Pepperdance of Panzibas and Josja Pruis were nominated for the Belgian prize The Golden Owl. For Josja Pruis he got a White Raven and won The Woutertje Pieterse Prize, the most important award in The Netherlands, (March 2007). De Volkskrant a Dutch newspaper named Tjibbe Tjabbes’ voyage around the world the best book of 2008. 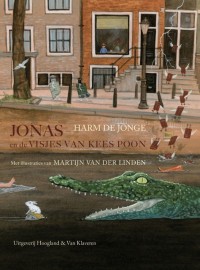 His latest book is called Jonas en de visjes van Kees Poon (Jonas and the little fishes of Kees Poon), 2013. Jonas is a boy who is bored but once he puts on his sunglasses very special things happen. The beautiful illustrations are made by Martijn van der Linden.
The playful Jonas is an ode to a lively spirit and a plea for unbridled imagination. The magic is enhanced by the illustrations with their fairy-tale atmosphere.

Vuurbom (Fire Bomb), 2011 won a Silver Slate Pencil in 2012.
Jimmie has landed in the hospital. He doesn’t remember how he was injured. Something terrible has occurred. Little by little becomes clear what happened. It is a book concerning friendship in the form of a crime novel. A captivating mix of whodunit and whydunit.
‘A splendidly constructed and exciting story, wrapped in a beautiful and special book cover’. 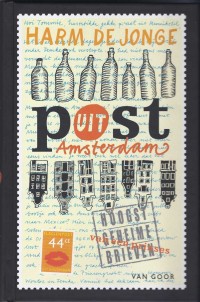 Flessenpost uit Amsterdam (A Message in a Bottle), 2010.Two young people inspire each other with their letters and their fantastic ability to imagine. Tommy is a dreamy kid from a small village. He’s been writing to Charly, a streetwise girl from Amsterdam, for some time now. Suddenly the stream of letters dries up and Tommy decides to go look for her himself.
‘Harm de Jonge’s unique novel is an appeal for written correspondence and genuine curiosity. A powerful tribute to the imagination’.

Tjibbe Tjabbes’ wereldreis (Tjibbe Tjabbes’ voyage around the world), 2008, with original drawings by Fiel Venius. A unique travel account by the learned Tjibbe Tjabbes about his quest to document and save remarkable animals from a new Flood. This book by Harm de Jonge is inspired by the biblical story of Noah’s Ark and Darwin’s journeys of discovery. The result is an intriguing combination of fantasy-fiction, non-fiction, humour, adventure and travel. A book for young and old alike. If you want to read some chapters see: http://www.letterenfonds.nl/en/book/667/tjibbe-tjabbes-voyage-around-the-world

The jury of the Woutertje Pieterse Prize called the book Josja Pruis ‘A pure narrative in which the qualities that we are so eager to find in children’s books converge in a marvellous way. It is a book which takes the young reader seriously and which will never be forgotten.’ If you want to read a review or some chapters see: http://www.letterenfonds.nl/en/book/537/josja-pruis

Harm de Jonge presents himself as a masterly storyteller, who holds his reading public spell-bound with an epic at children’s size, brimful of mystery, imagination and nostalgia.

Psychological thrillers and other riveting stories with a startling end (age 12+):